From the lofty Rocky Mountains in the west to the rounded Laurentian Mountains in the east, Canada’s topography gives rise to a wide range of ski and snowboard terrain. Add in long crisp winters, a steady supply of snow, and as many resorts as you can shake a ski pole at, and it’s no surprise the country’s slopeside offerings continue to pop up on readers’ choice lists.

To help you make the most out of your Canada ski holidays, here’s a sample of some of the top mountain resorts in the country – complete with on- and off-the-hill highlights.

With 13 major resorts sprinkled over 10 mountain ranges, British Columbia is a ski vacation mecca. Make tracks to the Thompson Okanagan region in the province’s interior and its host of well-rounded, family-friendly winter hot spots.

Cruise down Canada’s second largest ski area at Sun Peaks Resort, home to 4,269 acres of alpine bowls, open trails, and gladed runs less than an hour’s drive from Kamloops. Then dip into melted cheese and chocolate at the Fondue Stube for dinner, and a slopeside hot tub before bedding down in the village. Further south, just an hour’s drive east of Kelowna, Big White Ski Resort beckons with 16 lifts, 119 trails – and a 4.8-metre ice-climbing tower. Warm up with 60 varieties of hot sauce at Underground Pizza or over brunch after a horse-drawn sleigh ride through the woods. A 21.9-kilometre jaunt from Vernon, start on gentle slopes and open bowls before schussing secluded glades and sweet steeps at SilverStar Mountain Resort. Or take to Canada’s largest daily groomed cross-country network for the day. Hang your crew’s helmets at one of nine slopeside lodgings after a round at the world’s only ski-in/ski-out bowling alley.

Let it snow on Vancouver Island

Blessed with some of the biggest snowfalls in North America, Mount Washington Alpine Resort receives more than 11 metres of white magic each year. A 1.5-hour drive north of Nanaimo on Vancouver Island, the resort puts all that powder to good use on its 1,700 acres of alpine terrain, and cross-country, snowshoe, and fat biking trail networks.

After ripping through glades or carving groomed runs, point your tips down for après-ski at Ted’s Bar + Grill – think poutine, popcorn shrimp and craft beer – or the Eagle View Bistro, serving up charcuterie, wine, and mountain-and-park vistas. Then return to your cozy condo, chalet or A-frame cabin in the Swiss-style village. Bonus: stay at the on-mountain Bear & Deer Lodge.

Catch some of the best skiing in Canada along the fabled Powder Highway. Dusted with no less than eight unique resorts, the circular route connects you with mountain ranges like the world-renowned Rockies and laidback alpine towns like Revelstoke and Rossland.

Hit all the spots or just a few on the way. Billing itself the Champagne Powder Capital of Canada, Kicking Horse Mountain Resort near Golden thrills with 60 per cent advanced and expert runs, and more than 85 inbound chutes. Conquer those steeps on a Big Mountain Private lesson, then tuck into duck confit or wild boar at the Eagle’s Eye – the country’s highest five-star restaurant at 2,347 metres. A variety of terrain and piles of powder await at Fernie Alpine Resort near its namesake town, anchored by a historic hub of early 1900s brick buildings. And Panorama Mountain Resort near Invermere caters to novices and experts alike with both wide open cruisers and the gnarly all-black-diamond Taynton Bowl. Scoot into the mid-mountain Elkhorn Cabin for a raclette lunch, then soak in Canada’s largest slopeside hot pools at the resort base.

In the tracks of Olympian

Canada has hosted two Winter Olympics – 1988 in Calgary and 2010 in Vancouver. Experience these games’ legacies and ski or ride in the wake of medal-winning athletes at venues chosen for their slope angles, facilities and proximity to urban centres.

A 1.5-hour drive from Vancouver along the snaking Sea to Sky Highway, Whistler Blackcomb saw the likes of United States’ Lindsey Vonn rocket to gold glory in the women’s downhill. Make like an Olympic hero yourself on the same run – Franz’s is a long intermediate trail down to the bottom of Creekside – and scope out more game spirit at Whistler Olympic Park. Don’t miss post-Olympic attractions either, including the engineering marvel that is the Peak 2 Peak Gondola and the forest-merged Audain Art Museum. Down at Cypress Mountain on Vancouver’s North Shore, just try to hit the bumps like freestyle skier Alex Bilodeau did on his way to becoming Canada’s first ever Olympic gold medallist on home turf. Then wind down on a twinkly Lights to the Lodge snowshoe trek.

Next door in the province of Alberta, Nakiska was built for the 1988 games and has since lured skiers from nearby Calgary and beyond to its 79 varied trails – accessed by the aptly named Bronze, Silver, Gold and Olympic Chairs. Take a break at the Kananaskis Nordic Spa just down the road, where massages, mountain-view pools, a steam cabin, and more await.

Room to roam in Alberta

For a taste of some of Alberta’s 30-plus ski resorts, best to head to the Rocky Mountains in the southwest corner of the province. Here you’ll find satisfyingly long peak-to-base runs with plenty of shorter schussing options in between.

Home to Canada’s highest base elevation at 1,698 metres, Marmot Basin lies just a half-hour drive south of the railway-town-turned-mountain-hub of Jasper. Bomb down chutes, cruise groomed lines, weave through trees and master moguls, all the while taking in surrounding Jasper National Park vistas. On the way back to town, stroll past frozen waterfalls and ice caves on a Maligne Canyon Icewalk before hanging your toque at a wood cabin or luxurious lodge for the night.

A 1.5-hour drive east of Calgary or a mere 15-minute jaunt from Banff, Banff Sunshine Village boasts the country’s longest non-glacial ski season and its first and only heated chairlift. Explore three mountain faces while stopping to fuel up or chill out at seven village dining spots, then shuffle off to your deluxe balcony or loft room at Banff’s only ski-in/ski-out boutique hotel. Wake up and drive 40 minutes to Lake Louise Resort, where green, blue, and black runs can be reached from any chair. Then see the Rockies from another vantage on a guided snowshoe tour – take the two-hour scenic intro or the nighttime trek under the stars. Put your trail-tired feet up at the iconic Fairmont Chateau Lake Louise or other nearby hotels.

Tucked along the shores of South Georgian Bay, Ontario’s largest ski area – Blue Mountain Resort – is an easy 1.5-hour drive north of Toronto. The family-friendly destination delivers 363 acres of skiable terrain, ranging from the north section’s more technical trails – Elevator Shaft is the resort’s steepest – to the village and south sections’ vast mix of runs. Keep on skiing and riding well after sundown, when lights lead the way till 9 p.m. along a whopping 30 of the 42 total trails.

Off the slopes, slow the pace down on a few leisurely turns around the 1-kilometre-long Woodview Mountaintop Skating loop. Along the way take in Niagara Escarpment views by day and snow-laden-tree silhouettes at night on the illuminated route. Then shift into overdrive on the Ridge Runner Mountain Coaster, reaching speeds of up to 42 kilometres per hour on the 1-kilometre-long track. Sink into both hot and cold pools at the nearby Scandinave Spa before curling up at a nearby inn, lodge, condo or townhome.

Steep and deep in Quebec

With 10 ski resorts across three regions, Quebec makes it hard to choose which slopes to hit on a Canada ski holiday. But wherever you go, count on witnessing much lively French chatter (45 per cent of residents are bilingual), as well as Quebecois culture and cuisine.

Home of North America’s first ski lift in 1931, the Laurentian Mountains make for a fitting starting point, and Tremblant the ideal base a near-two-hour drive from Montreal. Sprawled across the range’s highest summit, the 102-trail winter playground consistently ranks No. 1 ski resort in the east in SKI Magazine. Meander down easy 6-kilometre Nansen or dare to tackle double-black Dynamite – either way you’ll end up in Tremblant’s Euro-style cobblestone village lined with bistros and boutiques, with townhouses, condos, and intimate hotels just steps away. Take a break from skiing to lead your own husky team on a guided dog sled adventure or get wet at the Brind’O Aquaclub with its four slides and 35 water games.

Anchored by the highest vertical east of the Rockies, Le Massif de Charlevoix juts out from the Charlevoix region just over an hour’s drive northeast of Quebec City. Sitting on the north shore of the St. Lawrence River, the resort delivers sweeping waterway views from 53 scenic trails that spill down to the sea. Refuel at the Summit Cafeteria, which takes pride in not serving anything fried, then give the guided sled run a go. Lastly, kick back in three-storey forest chalets or slopeside tiny houses.

Start planning your winter getaway with this list of some of the best ski resorts in Canada. 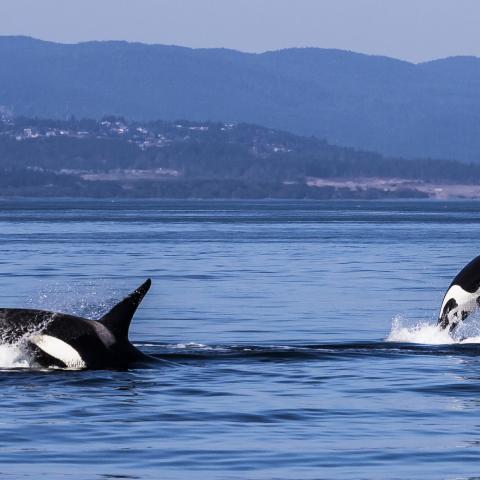 The Top 5 Places to Spot Whales in British Columbia 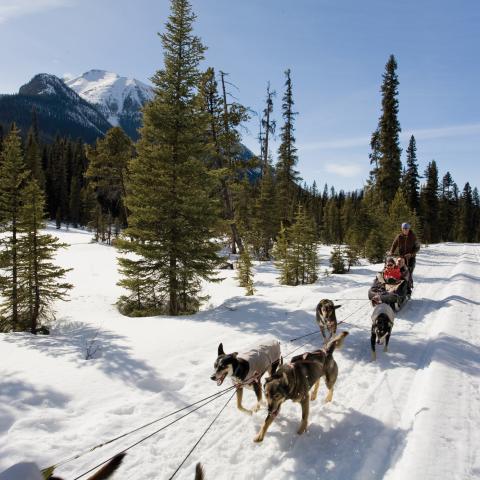