The Rideau Canal is more than just a waterway through a huge chunk of Ontario. Though central in location, what’s more central is its role in the city’s vibrancy throughout each and every season. Spanning 202 kilometres, this special section of water is a hub for not only boating, but also for culture and community.

Running from Kingston to Ottawa, the Rideau Canal connects several bodies of water — the Ottawa River, Rideau River, and Lake Ontario — and makes up the oldest operating canal system in North America. The Canal is home to a system of locks that were built to connect areas of the province in the early 1800s and are now mostly used by casual boaters throughout the summer months.

Though the Canal is famous for being the largest naturally frozen skating rink in the world (Guinness Book of World Records says so!), there’s certainly a lot to do in and around the waterway during the summer months too. Along the five miles of canal in Ottawa, and the remainder that runs throughout Ontario, plan to fill up a sunny day on your next visit with one of these activities.

Go back in time on a Voyageur Canoe tour

Grab nine friends and pile into an eight-metre Voyageur Canoe. With guides at the bow and stern, you’ll be able to explore Ottawa’s locks from the water with expert precision and colourful commentary. These tours are only available starting in June, so be sure to book a spot if you’re visiting over the summer. At under $10 per person, this is a great, affordable way to see the city from the water.

See the sights by bike

From the land, enjoy the parkways along the Canal by bike. Though the bike trails are only directly along the Ottawa section of the Canal, there’s still plenty to explore along the over six kilometres of pathway, like restaurants at the Dows Lake Pavilion and Marina and a detour to the Canada Agriculture and Food Museum. Start at RentABike, and then head out on your way! For a detailed route, check out Ottawa Tourism’s guide.

Spend the day at a museum

Whether you want to learn more about the Canal itself, or will use your journey along its shore to explore other facets of Canadian history and art, there’s a museum for you along this route. Stop by the Rideau Canal Visitor Info Centre in Ottawa; check out the Heritage House Museum or Railway Museum in Smiths Falls; visit the Gibbons Maple Sugar House and Museum in Frankville. Then, check out a bevy of culture in Ottawa or Kingston — whichever major city you end up in after your adventure.

Paddle at your own pace

Rent a canoe or kayak for the day and paddle along the Canal. The route is great for paddlers of all levels as the waterways are all relatively flat, making it the perfect way to enjoy some Ottawa sunshine. Plus, you’re able to use the famous locks with your boat for a small fee.

If you’re a more experienced paddler, you can paddle the whole waterway and camp at various spots along the route while checking out plenty of beautiful nature and a plethora of small towns. If you’re in it for a long haul, be sure to bring a map and know the hours of the locks if you’re going for a longer paddle.

There are a slew of quaint, neighbouring towns to explore along the Rideau Canal outside of Ottawa. Smiths Falls, the halfway point of the Canal, is home to restaurants and antique stores, as well as special events like movies under the stars and the annual Trainfest celebrating a booming industry of the past. You can also check out Westport, home to plenty of cute B&Bs and the Foley Mountain Conservation Area (a park that overlooks the town and is home to a sandy beach), or Merrickville-Wolford, an artistic community home to over 30 artisans.

All of these communities are viable day trips from Ottawa meaning you can see something different and still see all of Ottawa’s top sights in one trip.

Walk, run, and picnic along the shores

Going back to the basics, the Rideau Canal is a great place to walk, run, hike, or picnic. For a good hike, head to the Rideau Trail. As for picnicking, watch boats navigate the locks from the grassy lawns lining the shore. Some spots even have picnic tables, and in Ottawa the ByWard Market neighborhood is a great place to stock up on tasty supplies.

Stop and smell the flowers

Outside of the Netherlands, Ottawa is probably the most well-known place in the world to spot rows upon rows of tulips. In fact in 1945, Princess Juliana of the Netherlands gifted 100,000 tulip bulbs to Canada’s capital in thanks for the help the country provided during World War II. Lucky for visitors, these beautiful blooms live on today and line the banks of the Canal and other areas throughout the city.

No matter what way you choose to see the Rideau Canal in the summer months, you’ll be treated to a unique and memorable outdoor experience at Ontario’s only UNESCO World Heritage Site. Ottawa: What to See in a Weekend 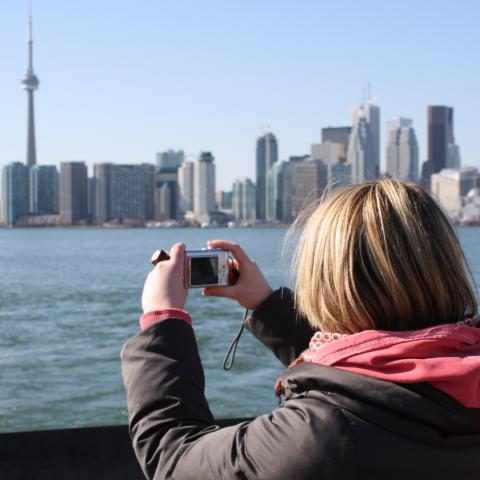 The Top 10 Attractions in Ontario