By Nikki Bayley
Nikki Bayley is an award-winning UK journalist and guide book author based in Vancouver.

It was misty when we arrived, the sea swirling in and out of sight beyond the stone walls and wooden palisades of the Fortress of Louisbourg. Tucked away in the southern part of Cape Breton in Nova Scotia, this sleepy part of the world was once the third biggest port in North America, after Boston and Philadelphia, and the site of two sieges which were crucial in the English and French battle for rule over Canada. I don’t mind a little rain or mist when I’m exploring a historical site; too much sunshine and I can’t readily conjure up a tragic past, and the history of Louisbourg offers up plenty to ponder through the drizzle.

One of the biggest surprises as you explore is that the site itself is not what it seems, although for all the world it looks an authentic 18th Century fortress, in fact, it’s a cunning modern reconstruction. The British destroyed the walls of the original fort – which took the French 28 years to complete and spread two and a half miles around the fort– in 1760. Fast forward two hundred years and many of those same stones were used again to rebuild the fort as a National Historic Site. I took a tour with wonderfully knowledgeable Parks Canada guide who made the centuries fall away as we walked the grounds and heard its stories and secrets.

Experience a warm welcome as you step back in time at the Fortress of Louisbourg.

History really comes alive here, beyond the Parks Canada staff; there are dozens of costumed interpretive guides roaming the grounds interacting with visitors while maintaining their ‘character’. It’s fun to chat with a French soldier from the 1700s who’s suspicious of your British accent! You can sign up to learn how to fire a cannon in a 45-minute training session where you get to dress up in French colonial uniform and march on parade with other soldiers. Or, for something less explosive, you can join a Healing Gardener tour and learn about the medicinal herbs and plants which grow in the fortress’s walled gardens.

Play your part as you sign up for cannoneer training at historic Fort Louisbourg.

Life in the 1700s certainly builds up your appetite, after a few hours exploring the grounds, visiting the blacksmith’s forge and the bakery, it was time for lunch. You can pick between an authentic “lower class” dining experience at the Grandchamp Tavern or go fancy at the Hôtel de la Marine. The Tavern sounded much more fun. You only get to eat with a spoon –there were no other utensils on offer in taverns at the time and you had to keep the same one for the whole meal. So, spoon at the ready and cotton napkin tied around my neck, I dug into pea soup, a hearty beef stew and then a delicious apple pie. As history lessons go, this is a really fun way to learn about Canada’s past, there’s definitely nothing stodgy here – not even the bread pudding! 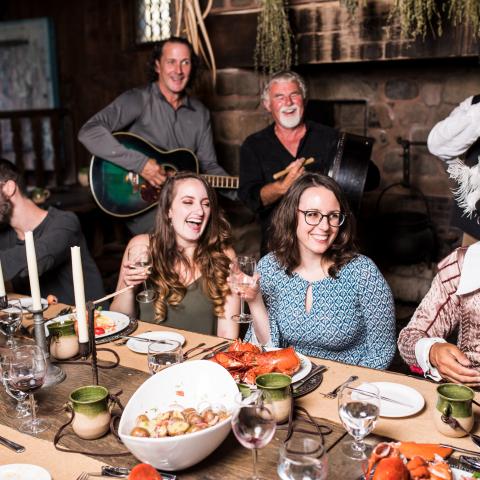 7 Ways to Immerse Yourself in Nova Scotia’s Acadian Culture 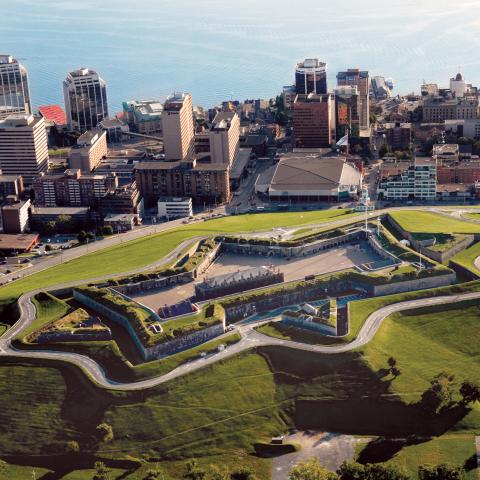